Interested in knowing how to hide the age of your vehicle? A personalised number plate might be the ideal method of concealing the age of a vehicle, but there may be an assumption that buying a private number plate is expensive. We have the perfect solution! Our range of Cheap Irish Number Plates are priced at just £40 plus VAT, in addition to an £80 Government Transfer Fee. You can browse our Cheap Irish Plates below.

You can also make use of our advanced SpeedyFilter below, allowing you to look for specific letters and numbers for your personalised registration. Simply enter in one or two characters within the Find in Results box below and the list of results will be filtered accordingly

What is an Irish Number Plate?

Our cheap Irish number plates are always prefixed by three letters, followed by a series of up to four numbers. This makes cheap Irish plates a brilliant option for a range of names, professions, and interests. These vary from region to region, with SpeedyReg’s home county of Fermanagh hosting some of the most popular cheap Irish number plates, the IL and IG ranges. These registration letters cover a host of names, including BIL, WIL, FIL, GIL and JIL, and more recently DIG and GIG number plates (perfect for construction vehicles or musicians!)

Why choose a Cheap Irish Plate?

Irish number plates can be used to disguise the age of your vehicle as they are dateless registrations at a low cost. Due to the combination of letters, cheap Irish number plates are a favourite choice for people who want to customise their vehicle with a personalised number plate at an affordable price.

Of course, the main attraction of cheap Irish plates is the price and they don't come any cheaper than Speedy Registrations, where you can chose from hundreds or Irish plates, all priced at £40 plus VAT

SpeedyReg are proud to be the market leader and supplier of cheap Irish number plates to the British public, in addition to being the main trade supplier to other number plate dealers as a result of our vast selection of registrations.

SpeedyReg’s advanced online search facilities make purchasing a cheap Irish plate easier than ever, allowing you to order securely online or on the phone. Our cheerful and helpful sales staff will talk you through the procedure, help you with your enquiry, and make sure you get the personalised number plate you desire.

You won’t find a more affordable way to purchase an Irish number plate than right here on our selection of Cheap Irish Plates at SpeedyReg. Don’t delay, call us today! 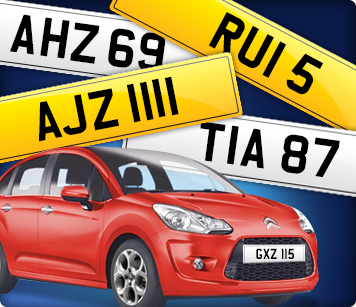