Supporters who bought personalised car number plates reflecting their enthusiasm for Manchester United in previous years when the team was not riding so high could have made a shrewd investment.

"The best of the MU plates currently available on the market - MU 3 - has escalated in value to over £30,000," reports Des Elton, founder and CEO of Speedyreg.co.uk, the UK's leading dealers in dateless personalised vehicle registrations. "But there are still lots of bargains, some with good growth in value potential as investors seek alternative, higher yielding investment opportunities now that other markets are not performing as well."

But if the same letters are combined with only one number, the value shoots up to over £5,000

As plates relating to soccer clubs or top players rise in value, there is a temptation among some fans and unscrupulous sellers to try to buck the system, for example by manipulating the spacing between the numbers and letters, changing the groupings and trying to use the mounting screws to change how a number looks.
But that is getting very risky with the increasing use of numberplate recognition cameras to monitor speeding and other traffic regulations, and to catch criminals. The police are really cracking down on dodgy plates and penalties can be as much as a £1,000 fine and confiscation of your vehicle.
Illicit plates sold online are a big problem - the only reliable sources of UK number plates are suppliers approved by the DVLA (Driver and Vehicle Licensing Agency) who must identify themselves and give the British Standard details on the plates.
Plates for players' fans

Fans of the ever-popular Ryan Giggs can get this plate from Speedyreg.co.uk.
It is unique in spelling out his name - the numerals 6 and 9 act as the letter S - and 11 is his shirt number. 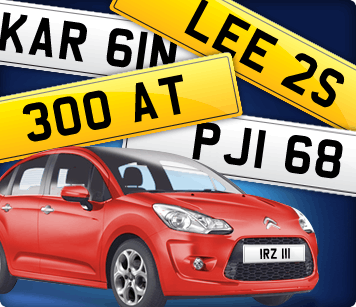