Somewhere in the early part of the 20th century a revolution occurred and automobiles began to appear on the roads of Britain in significant numbers. While initial uptake was understandably slow, by 1904 there were sufficient numbers for the government to introduce the Motor Car Act of 1903, which legally obliged any car owner to display a car number plate. The fate of the legendary “A1” number plate (first registered to Earl Russell in December 1903) remains shrouded in mystery and many car number plate aficionados see this as the holy grail of private number plates. Whatever its fate, were the “A1” ever to turn up in the public market you can be sure that it would fetch a bob or two.

From January 1st 1904 every motor vehicle used on British roads required a registration number with each local council assigning their own code – London was A, for example. When single letters ran out, two letters were used (although some double-letter combinations were discounted because it was considered they could cause offence, or, as in the case of “ER” already had a designated significance.)

Of course, as the numbers of cars gradually began to increase, so the efficacy of the old numbering system began to decline. By 1932 the system had expanded to include three letters and three numbers – after the Second World War this was changed around to three numbers and then three letters. These plates are still widely available and prices range from a couple of hundred to several thousand depending on the letter/number combination.

By 1963 a totally new system was introduced with a letter allocated for each plate denoting the year of registration (DWS 234 A, for example, with the A denoting the year. Since then August 1st of each year has become the changeover date – and, as you would expect, there is a peak in car purchasing at that time, as people rush to become the first to own a new car.

This demand for the newest plate prompted a growing interest in what became known as personalised number plates – the early plates in particular becoming much sought after, particularly those with “special” numbers or car model numbers.

While dealers had been buying and selling sought after car number plates for many years it wasn’t until the DVLA introduced the “Select” scheme in 1989 that buying a special private number plate became more widespread. These days anyone can choose a number plate to suit their name, interests or car model – sometimes for as little as £40 – while special number plates can fetch several thousand pounds. 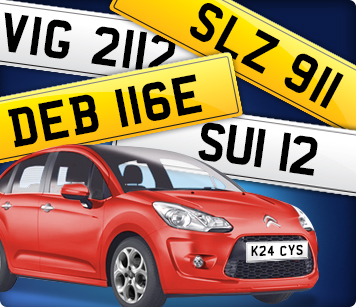