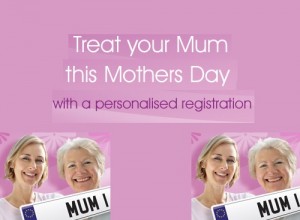 Give the gift of Thoughtfulness on this Mothering Sunday

Mothering Sunday is an annual celebration of mothers, maternal love and the bond and respect between mothers and their children. It’s the one day of the year that celebrates the gratitude that children have for their mums.

Motherhood has always been celebrated through the years with literature showing the Greeks, Egyptians and Romans holding festivals in honour of goddesses and mothers.

These days, it’s less about the festivals and more about the display of affection. In the US alone, mothers day is the biggest restaurant day in the year according the National Restaurant Association.

So instead of the usual carnations, cards or gifts, perhaps this year think about a gift with a bit more longevity. A perfect gift is a personalised number plate. It’s different to the normal gifts that people buy and mums will appreciate the unusual gift.

As every personalised number plate is exactly that – personalised, your gift to your mum is really one in a million. And actually, it’s one in 31 million (that’s the amount of cars on the road these days).

It’s easy to go to a florist and buy a bunch of flowers. But a personalised number plate requires thought. It shows that you care.

And while you’re thinking about what would best suit your mum, here’s some history about Mother’s Day that you may not have known.

Mothering Sunday in the UK & Ireland

Mothering Sunday in the UK and Ireland goes back to the 17th Century. Early Christians in the 1600s were said to honour the ‘Mother Church’ or the church in which they were baptised. This was historically held on Laetare Sunday, where the place of worship would be decorated with flowers. Children and parents would typically visit the same place and as such mothers would get to see their children which they may not see regularly.

Sometime in the 1600s, a clerical decree broadened the celebration to include not only the Mother Church but mothers as well. It was held on the fourth Sunday in Lent. (And still does to this day, hence the different dates every year).

It was seen as a compassionate day for the working classes of England. On this day, servants were given the day off to return home to celebrate the day with their mothers. A family meal with cake was served and the mother was the guest of honour.

However over time, the celebration was forgotten about nationwide and was celebrated on a small scale within certain communities or families. It wasn’t really until World War 2 that it came back in favour. It’s said that US soldiers who celebrated ‘Mothers Day’ (typically in May in the US) reignited the old mothering flame. Mother’s Day was merged with Mothering Sunday and is now officially celebrated on the fourth Sunday in Lent.

Since the 1950’s, it has grown in popularity with shops selling and promoting Mothering Sunday or Mother’s Day.

So this Mother’s Day, show your appreciation and gratitude to the one person who gave birth to you and stands by your side every day of the year.

Forget the usual gifts, get her a personalised number plate to show how unique she is to you.