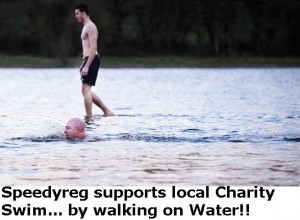 Photo of  Courtesy of Donnie Phair

Every year since 1992, come hail, rain or snow Dessie Elton from Speedyreg and more recently his son Rory supports a local Charity New Year’s Day Swim. Rory is seen above walking on water, but we have been told that he also took the plunge and completed the swim.

This year was the 19th Annual Galloon New Year’s Day charity swim, where 39 volunteers plunged into Lough Erne, at Galloon jetty Newtownbutler in the name of charity.  This year the money raised was for the Neurofibromatosis charity.

John Fitzpatrick who organised this event, said “everything went well and it was a great day”.  He is looking forward the organising the 20th annual swim next year.

At least this year the organisers didn’t have to break the ice beforehand for the swim!!