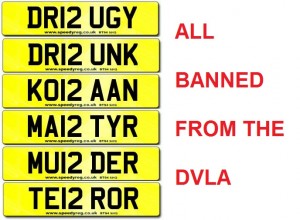 Officials from the DVLA have banned number plates such as SC12 OTM and VA61 NA*. They are also banning PE12 VRT (pervert)

DVLA officials have drawn up a blacklist of questionable registration numbers, including PE12 VRT (pervert) and PA12 EDO (paedo).

They will omit the following list of number plates:

The DVLA are trying to identify combinations that may cause offence, however on the rare occasion where potentially offensive numbers slip through the net, steps are taken to withdraw the registration number.

Can you think of any other combinations that might be banned?