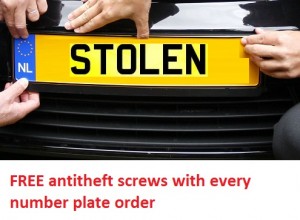 Stolen number plates used in fuel theft, is a heading we are constantly reading when we pick up a Newspaper.

Less than a day ago Berwick Police appealed for information after number plates stolen from a car in Berwick were found to be used in the theft of fuel from a local petrol station. The plates, N352BWL, were taken from a red Vauxhall Cavalier between September 6 and 16. At around 5pm on Friday, September 16, a purple Ford Cougar bearing the plates made off without paying for £80 of fuel from Lindisfarne Services at Beal.

But did you know that we at Speedyreg are issuing anti-theft screws to all our customers that purchase physical number plates for their vehicle, free of charge, YES that is correct Anti-theft Screws at no extra cost.